I am a composer, arranger/orchestrator, musical director and pianist. With over 30 years in the field of theatre (primarily), TV, radio and film, I’ve gained extensive experience in every music-related aspect of a production:

I studied at Cambridge University where I was for two years musical director of the Footlights.   On leaving university, I quickly established myself as a musical director and pianist in rep theatre, the West End, the RSC and the NT. I also started my career path as a composer and arranger, initially for the National Youth Theatre and radio comedy programmes, subsequently for mainstream theatre as well as some TV and film work.   As an arranger I have orchestrated shows for commercial national tours, for major repertory theatres such as West Yorkshire Playhouse and Sheffield Crucible, as well as fourteen musicals at the Open Air Theatre, Regent’s 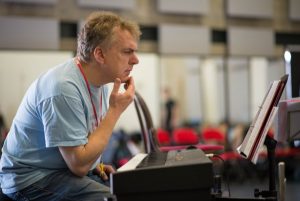 Park.   From 1994 to the present day I composed music for around a dozen shows at the National Theatre, mostly during the artistic directorship of Trevor Nunn,  I have also music-directed numerous other NT shows.   Although my passion is writing for real – live – instruments, I have in latter years also become proficient at Logic software and in several more recent scores have combined electronically created music with an overlay of live players.   Nowadays my work time is chiefly split between writing music for plays, arranging/adapting/orchestrating existing musical theatre scores, and composing new musical theatre pieces – with a healthy dose of improvised piano on the side. 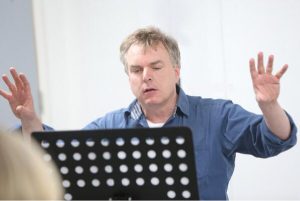 You can read and/or download a full CV here

….and listen to some samples of my work here (and at various places throughout this site)